Hot Temps, Active Tropics, Snow In May and a Drought. A Little of Everything in 2020.

2020, the year of the pandemic and likely at the top of the list for how this year will be remembered by many.

In addition to the pandemic, some wild weather as well. Here is a look back at some of the more memorable 2020 weather events.

Take you back to the beginning of the year, Sunday, January 12th. We knew the weekend was going to be warm. The forecast for the 11th AND 12th were for temps to reach the 60s! A record setting warmth for the weekend and Mother Nature delivered. Saturday, the high temperature reached 65°. A record high for the day shattering the old record of 61° in 1975. Could the 12th actually be warmer? Yes indeed. Sunday, the temp soared to 70°. Not only breaking the old record for the day of 62° in 2018, but for the first time ever T.F. Green reached 70° in January. Never in 115 years of records had that ever happened before. 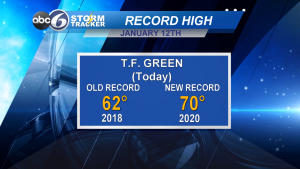 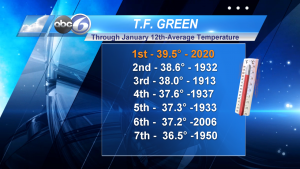 The warm weekend would catapult January 2020 to the top spot for the warmest ever after 12 days, eventually ending as the 6th warmest January ever at the airport. February would be warm as well, ranking top 6th warmest of all time. March would continue mild, average temperature for the month 43.6°. Tied for 8th warmest March ever. Then April…Covid cases on the rise, the pandemic reaching new levels of concern. Many just wanting the weather to warm up to allow for time outside. Mother Nature had different plans for our area. After a very low snow season, 1.2″ of snow fell on the 18th of the month and after early April started off relatively warm…snow and cool temps dominated the second half of the month. How cool? Typically the difference in average temperature from March to April is about 10° give or take a few degrees each year. In 2020, the average April temperature was nearly identical to March. Very odd with less than a 2° difference between each month. 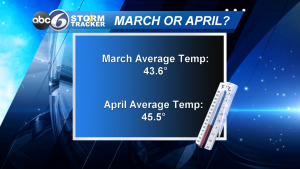 Despite the colder temps in April, snow totals remained low for the season. Just 13.2″ of snow recorded at T.F. Green, well below the nearly 34″ on average. The snow totals may have remained low, but one last blast of cold for the weekend of May 9th and 10th. So cold, some snow observed for many locations both days (A Trace at the airport) That would be last of the cold for quite some time. Late May would warm nicely and we were well on our way to a very, warm Summer. A record setting Summer, the warmest ever at T.F. Green. 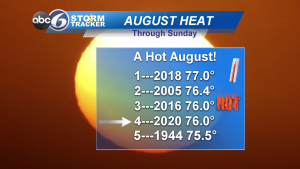 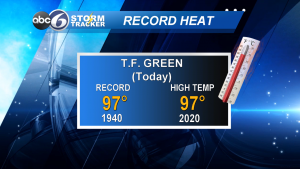 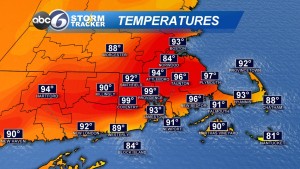 Ranking top 5 for July and August, top 12 in June. The hot temperatures for the Summer not the only weather story, but the lack of rainfall. Staggering low rainfall totals all Summer long contributing to drought conditions that would continue through Fall. 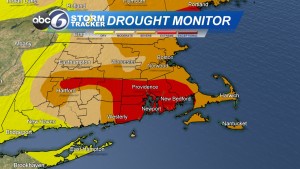 The pattern would eventually flip in October. Drought conditions improving, but the damage from the hot and dry Summer would be lasting. And during the pattern change to effectively bring more in the way of rain for October, November and December (at times with snow and rain)…temperatures remained warm, especially in November. How warm? How about 6 consecutive days of 70°+ warmth! The week before we mentioned on air and showed this very graphic… 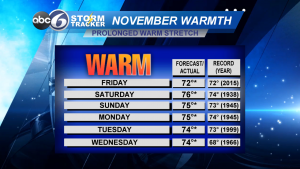 a chance to break a record 6 straight days. A day or two in November of 70°+, sure…but 6 days in a row! Crazy. The nearly week long run of 70° temps helped November finish in the top 5 warmest. With many months of above average temperatures it is likely no surprise that 2020 will also be remembered for the warmest YEAR ever observed for our area. Average temperature of 54° puts us at the top of the list. 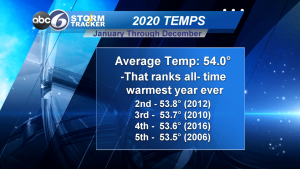 Even with all the warm temperatures, we did still find time for some oddly timed snow!  I mentioned the May 9th and 10th snow, but we also had snow in October. Squeezed in between mild temps, just enough cold that on October 30th…it snowed! A modest 1.6″ at T.F. Green, but locations in Northern and Western Rhode Island received 3-6″ of the pasty, white stuff. Enough for this cool “Pumpkin Snowman” sent to us by Erika Gervais. A creative use of combining snow and Halloween! 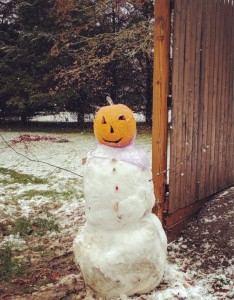 Also in October, two full moons! The first on October 1st, the second on Halloween night. 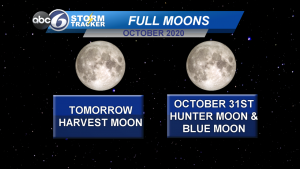 The Harvest Moon early in the month, the Hunter Moon at the end the month. When two full moon cycles fall within the same month, the second full moon of the month is also a Blue Moon. Hence, the expression, “Once In A Blue Moon”. Something that rarely happens. What also was so rare, a Halloween full moon happens only once every 18-19 years and you will have to wait until 2039 for it to happen again. In addition to the moon phenomenon, the “Christmas Star” in December. Some were amazed, others not all that impressed. Jupiter and Saturn passing so closely together on the evening of December 21st, that it looked like one big, beautiful star in the sky. Dubbed the “Christmas Star” and something that had not happened in 800 years. 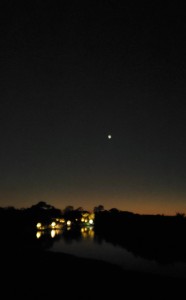 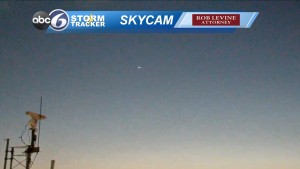 We all remember how active the tropics were this season. 31 cyclones, 30 of the 31 named. Used up all the names through Wilfred and then had to use the Greek alphabet, first time since 2005. 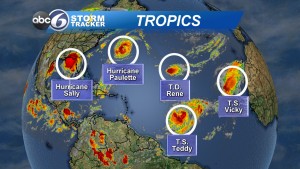 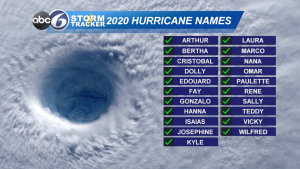 After Wilfred, Alpha, Beta, Gamma, Delta, Epsilon, Zeta, Eta, Theta and Iota. Many named storms, but one in particular, not only was hard to pronounce, but also made an impact on the area with brief, damaging winds. At one point, Isaias reached hurricane strength, but was downgraded to a Tropical Storm by the time Isaias made it to Southern New England. Isaias pronounced, ees-ah-EE-has, was a difficult storm to pronounce, but not a difficult storm to forecast. Isaias was a big rain and wind maker for locations to our West, CT especially hit hard. For our area though, just a wind event. A very fast and rapidly moving wind event. It took only a matter of minutes, strong winds, hardly any rain and then….the sun! But the damage was done, especially for locations in Rhode Island with over 30,000 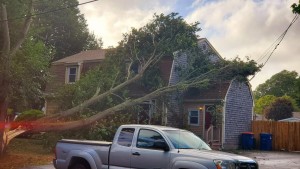 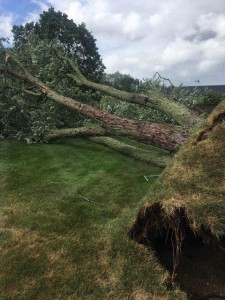 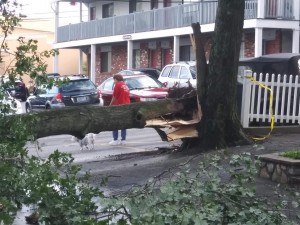 reports of power outages and numerous reports of trees down. Here are some of the pictures from that day, Tuesday, August 4th. 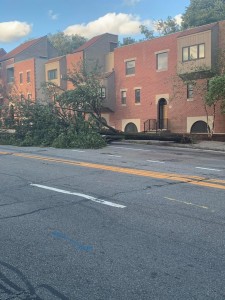 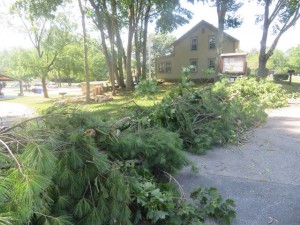 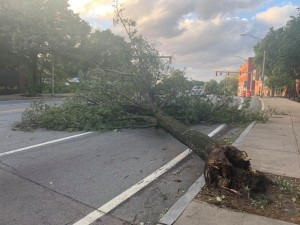 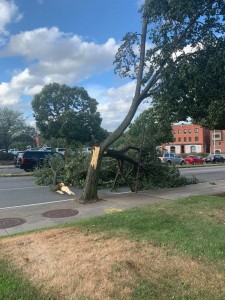 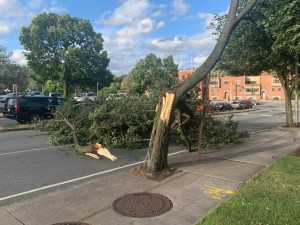 Other notable events, rainbows! On May 11th, the sky was filled with beautiful rainbows and the pictures came racing in! I tried to share as many as I could. A few quick moving showers followed by sun quickly popping and some incredible rainbow images! 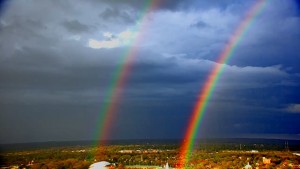 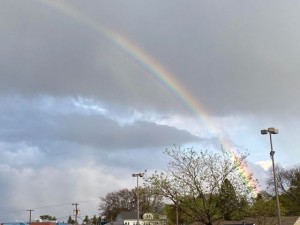 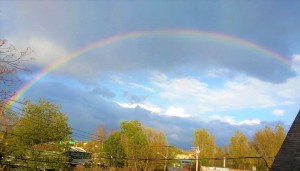 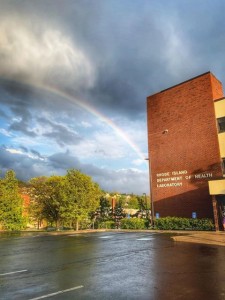 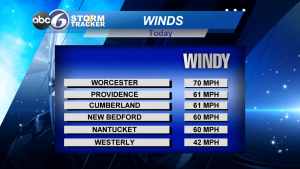 And the Christmas rain. A big wind and rain event forecast for Christmas Eve and Christmas Day, played out as much more of a rain event. Despite gusty winds, power remained on for most. Flooding was a problem. Street, rivers and many of you with basement flooding. Nearly 4″ of rain falling in Coventry! 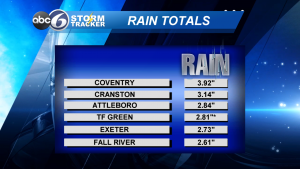 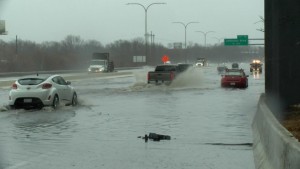 I am sure I forgot something worth mentioning, but for now that is some of the weather events that make it to the top of the list for me in 2020.