Politics aside, parties on both sides “disturbed” by actions in D.C.

“I’ve been in Congress now for 20 years and we’ve seen all kinds of protests, some quiet passionate, but we’ve never had a situation where protestors take it to the next level and storm the Capitol,” Representative Jim Langevin said.

Tweets flooded in from lawmakers with one common message: disappointment.

I'm safe & determined to defend our democracy from these heinous attacks. This violent mob, incited by Trump, breached the Capitol, but our work continues & our principles endure. They will not destroy our democracy, undo the election, or subvert the will of the American People!

We are back in the Senate Chamber and getting back to the proceedings. Let’s hope our day of infamy and outrage has taken some wind out of the sails of our reckless and irresponsible objectors.

On the other side of the political aisle, Republican Mayor of Cranston, Kenneth Hopkins released a statement saying in part, “This is not the America I know or we grew up in. The world watches as disturbed protesters and uncontrolled mobsters disrupt the national certification of a new President’s election.”

“We didn’t agree when violence occurred over the summer in Wisconsin and Portland and certainly yesterday,” Cienki said. “The rhetoric has to be turned down. We have to get back to talking to one another and not resorting to violence.”

The certification was the final piece needed to make the transition official, but some believe more action needs to be taken. 17 Democrats on the U.S. House Judiciary Committee led by Representative David Cicilline released this letter, calling on Vice President Mike Pence to invoke the 25th amendment and remove Trump from office. 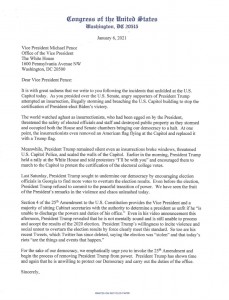 “It’s un-American, it’s unpatriotic, it’s undemocratic,” Congressman Cicilline said. “We’re not going to allow it to happen. It was very disturbing to see and I think the President has a real responsibility here.”

The Rhode Island U.S. Attorney’s Office also announced steps to prosecute those who traveled from the Ocean State to D.C. and played a part in the violence.

We, together with our federal, state, & local law-enforcement partners, are committed to prosecuting those who traveled from RI to commit federal crimes at our Nation's Capitol. Anyone who did so can expect to be prosecuted in Rhode Island to the fullest extent of federal law.