A Rhode Island man's discovery while metal detecting may hold the key to unlocking the history of one of the greatest criminal mysteries.

WARWICK, R.I. (WLNE) – A Rhode Island man’s discovery while metal detecting may hold the key to unlocking the history of one of the greatest criminal mysteries.

Jim Bailey has been metal detecting since he was 16. In that time he’s found all kinds of things from colonial America.

But it was in 2014 when he struck gold, or silver rather, and unearthed a coin from the 1600s at a farm in Middletown. 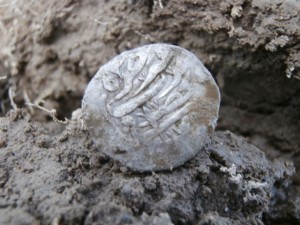 “I recognized the coin had Arabic script on it and I knew right then and there that this was something exceptional, something that you’re not going to come across,” said Bailey.

Since then, Bailey has been doing research on where the coin might have come from, and how it got there.

“This is more than just the story of this one coin. If it was just this one coin, we wouldn’t have a story,” said Bailey. “These are the oldest Arabic silver coins known to be found in North America.”

In the last seven years, 15 other similar coins have been found in Massachusetts, Connecticut, and three more in Rhode Island.

Bailey explains that his most recent research has given him the confidence to say definitely that a murderous pirate named Henry Every made a stop in Newport while he was on the lam.

“He’s regarded as a successful pirate. He was never apprehended, he vanished without a trace,” said Bailey. “For 325 years that’s been the story.”

Every and his men pillaged a ship from the Far East, coming out of the Red Sea, which was filled with gold and silver, in 1695.

They then sunk their ship in the Bahamas, and purchased a new one called the Sea Flower, a ship which Bailey recently found in his research.

“We have multiple primary sources that make this a case beyond all reasonable doubt that Henry Every came to New England.”

Bailey says the coins not only unlock this long forgotten history, but bring it to life.

“For three centuries we have not known what really took place, and now we know,” he said.

Bailey is currently keeping the coin in a safety deposit box, but says he wouldn’t be opposed to loaning it to a museum.

He says since this news has been circulating recently, a man in Connecticut has come forward to say he also found a coin when he was a young child.

Bailey is hoping to write a book about his findings.

Pawtucket police confirm shooting in the area of Newell Avenue

Car crashes off of I-195 onto neighborhood street

Closed Catholic school to be converted to senior apartments