While Massachusetts pot shops were given the green light to reopen Monday, albeit differently, Nova Farms in Attleboro had its grand opening.

ATTLEBORO, Mass. (WLNE) – While Massachusetts pot shops were given the green light to reopen Monday, albeit differently, Nova Farms in Attleboro had its grand opening.

Attleboro’s first recreational marijuana dispensary was supposed to open nearly two months ago. Now they’re having their opening day in the middle of the pandemic.

The parking lot at Nova Farms in Attleboro was filled with cars starting early on Monday morning, with hundreds picking up their recreational marijuana orders curbside.

“Been quite the wild ride!” said General Manager Marc Figueiredo

Before they even opened this morning, they say they had between 200 and 300 orders ahead of time.

It’s been a long wait for the pot shop which was originally supposed to open April 1, after working for the last four years to get licensed. Now in the midst of the pandemic they’re ‘open,’ but can’t let anyone inside. 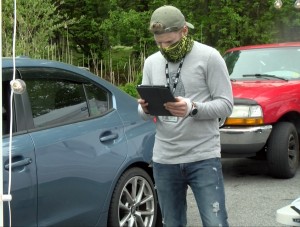 “Been different for sure,” said Figueiredo. “Our staff is new to this! And they weren’t trained in our building and they’re all getting trained outside.”

Most of the staff was trained remotely for the last few weeks. Right now they’re operating by having customers order online ahead of time. Then they send them a text when their order is ready to pick up.

“We recommend masks to be on,” said Figueiredo. “We’re trying to just keep everybody’s windows up as much as we can.”

They’re also keeping the transactions as contact-less as possible and sanitizing between customers.

“Trying to really limit that exposure from hand to hand,” said Figueiredo.

Despite the unexpected shift due to the pandemic, they say adapting quickly is something they’ve grown used to in their line of work.

“Everyday in this in this industry is years in other industries so we’re used to pivoting,” said Ross.  “So this wasn’t a big deal for us.”

Nova farms says they’ll operate like this as long as they’ll have to but they’re looking forward to the day they’ll be able to welcome customers inside to their brand new dispensary.