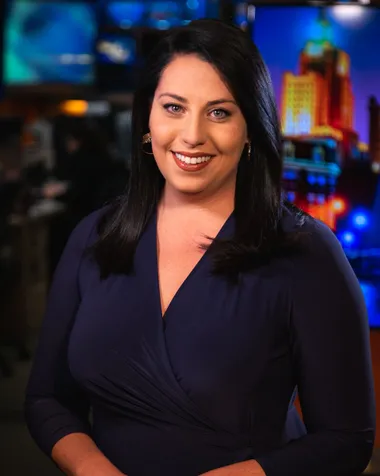 ABC6 Morning Meteorologist Chelsea Priest is a Rhode Island native. She was raised in Warwick and graduated from The Prout School in Wakefield. Chelsea earned her Bachelor of Science degree in Meteorology from Plymouth State University in Plymouth, New Hampshire.

Following graduation, Chelsea moved to Southeast Ohio to pursue her passion for weather. She worked as the morning meteorologist at WHIZ in Zanesville. After spending a year in Ohio, Chelsea was thrilled to move back to the Ocean State and work right here at ABC6 as the weekend meteorologist and weekday reporter. Since she joined the Stormtracker Weather team in 2011, she’s covered many big weather events like Tropical Storm Irene, Sandy, and the blizzard of February 2013.

In January of 2015, Chelsea took over the weekday morning meteorologist position and you can now catch her Monday through Friday on Good Morning Providence.

When not forecasting the exciting and ever-changing weather of Southern New England, Chelsea can be found enjoying everything else the area has to offer. Her favorite pastimes include sailing, dancing, skiing, traveling, and spending as much time as she can at our amazing beaches! Working in Rhode Island means so much to Chelsea as she can also spend
time with her tight-knit family and close group of friends.

Chelsea is a member of The American Meteorological Society and can be found sharing her passion for weather with local students while visiting schools across the area.

Feel free to reach out to Chelsea to
plan a school visit. You can reach her at cpriest@abc6.com.

Pick of the Litter: Meet Wilbur

A cool & damp start to the work week

A nice end to the work week, some rain this weekend

Pick of the Litter: Meet Brandy!

Dry & breezy to start the week

April showers this morning, back to sun Friday

Pick of the Litter: Meet Drake

Warming up as we clear out this afternoon!

Pick of the Litter: Meet Bear

A mild day ahead, some rain later this week

Pick of the Litter: Meet Lola

Another cold day ahead, ups & downs this week

Warm Friday but cooler for the weekend

Back into the 60s for many today, cooler at the beaches

A bit cooler today, especially at the coast

Pick of the Litter: Meet Bella

Chilly today but warming this week

Chilly temperatures as we head into the weekend

Sunny but cooler today, some rain this weekend