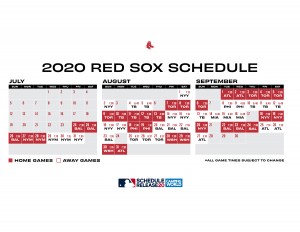 BOSTON, MA – In conjunction with Major League Baseball, the Red Sox today announced their 60-game 2020 regular season schedule, which has the team opening at Fenway Park on Friday, July 24, in the first of a three-game series against the Baltimore Orioles.

The shortened season has the club playing American League East and National League East opponents only, and includes 30 home games at Fenway Park and 30 road games.

The Red Sox will host the Yankees at Fenway Park only once, September 18-20. The club will travel to Yankee Stadium twice with a three-game series July 31-August 2, and a four-game series August 14-17.