BRISTOL, R.I (WLNE) – 26-year-old Chase Gilroy, of Warwick, turned himself in at Police Headquarters on Thursday, after fingerprint analysis matched his prints on multiple racist stickers that were placed around Bristol.

On April 24, Bristol Police received reports of suspicious activity in the downtown area when an individual was walking on Hope Street and found a sticker with ‘discriminatory connotation’ outside the Rogers Free Library window.

The reporting party had removed the sticker that read “white boy summer” over a picture of Adolf Hitler and gave it to police. 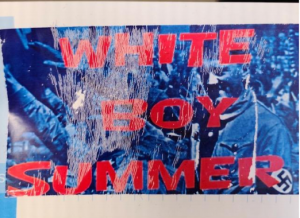 Police also received reports of a similar sticker on the outside of a mailbox on Hope Street. 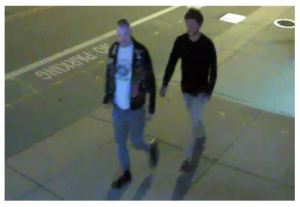 Bristol Detectives were able to find video footage of two possible suspects, who were observed placing stickers seized by police in various locations.

As information developed, Bristol Detectives began expanding their pursuit outside the Eastbay area and followed up on every lead.

The department transported the stickers to the State Police Crime Laboratory for analysis,  in hopes of properly identifying the suspects involved.

A few days later, the department received notice that matching fingerprint impressions were found on three of the stickers.

Several latent prints developed and it was determined they belonged to Mr. Gilroy.

Gilroy turned himself in and is scheduled to appear for Pre-Trail on June 18.

The second suspect has not been identified at this time.