“Get it together”: Warwick parents frustrated after buses stop service Friday

WARWICK, R.I. (WLNE)- School buses in Warwick will not be providing transportation to students on Friday.

Long line of cars at Veterans Middle School after parents woke up to an email saying there will be no buses at all today for middle and elementary school students due to a “labor issue”. @ABC6 pic.twitter.com/ViKYWNfk18

The school department sent an email to parents at 6:45 a.m., notifying them of a union labor issue resulting in buses not being dispatched. 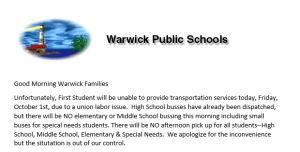 ABC 6 News spoke to frustrated parents lined up outside Veterans Middle School. Many were sitting in long lines, late to work, and their kids, late to school.

“I guess the bus drivers are on strike so my house which is 8 minutes away took 38 minutes to do this,” Matt Patty said. “And now it’s probably going to take another 20 minutes to get back to my office. As a taxpayer, I’d like to say I want a refund.”

“I’ve been waiting,” Lisa Pouler said. “We left our house at like 7:20, it’s almost 7:50 now. I take him every morning it takes about 15 minutes, he’s already late sitting in this line it’s insane.”

Mayor Frank Picozzi released a statement regarding the issue.

“Our school bus service is from a private company and the contract dispute is between the company and their employee’s union. This interruption in service seems to have been a last minute decision and no notice was given. The school department immediately started to deal with the situation and are still working on it. They will be meeting with the bus company later today and I plan to be there.”

ABC 6 News reached out to First Student, the company that provides busing to students across the city. They declined to comment.

Union representative Steven Sousa said the bus drivers showed up ready to work, but were told to go home.

“I just want parents to know drivers and monitors at First Student are here to work,” Sousa said. “As the father of two young children that rely on transportation as well, we would never advocate to strand anyone.”

This is a developing story, more details will be added as they become available.

Former IT director accused of embezzling over $1M from Warwick company