PROVIDENCE, R.I (WLNE) – The Christopher Columbus statue in Providence was protected by police after they received a tip it would be targeted by vandals on Tuesday night.

Two Providence police cruisers were parked across the street with lights shining onto the statue, and officers were present all night.

An online flier started circulating on social media saying an organized attack would happen on the statue at 11:00 PM.

The Rhode Island chapter of the ACLU has been critical of the Providence Police department for recently charging three people with felonies for vandalizing the statue, calling the charges “deeply troubling”. 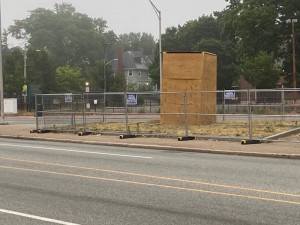 One of the people charged is a 34-year-old middle school teacher from Pawtucket, who is currently on administrative leave.

The statue, currently boarded up, was vandalized twice in 2019.

Easton's Beach in Newport packed with most adhering to the rules, while State Beaches reach capacity

18 injured in fire aboard ship at Naval Base San Diego