ATTLEBORO, Mass. (WLNE) – A couple is pleading for help to try and find the driver who hit their car earlier this month then took off, leaving them injured and their vehicle totaled.

“This is the last thing I expected. Someone to hit me and take off, I figured they’d at least stop to check if we’re okay, and that didn’t happen.”

Dariel Nunez of Sharon and his girlfriend Milena Cabric of North Providence were driving up 95 North on May 6, when they stopped at McDonald’s in Attleboro just after midnight. It was there on Washington Street where a car rear-ended them.

“A dark blue Subaru Impreza just hit me from behind really violently,” said Nunez. “When I got hit, I went on the curb and both my tires were blown, and somehow I managed to get back on the road. We went probably like a few hundred feet and we stopped at the set of lights.”

At the intersection of Washington Street and Newport Avenue, Nunez looked over at the driver, who he describes as a white man with light brown hair, and told him to pull over so they could call the police.

“His airbags were deployed, there was smoke in the car,” he said. “I looked over and he was like, oh, I’m so sorry, and I was like oh, get out the car, I’m gonna call the ambulance, I’m gonna call 911. He’s like oh, no I’m gonna pull into CVS right here… And I said no, no it’s fine just get out of the car and he’s like, no, I’m going to pull into CVS. And as soon as he said that, he took off.”

The suspect motor vehicle sustained heavy front-end damage with airbags deployed. The operator of vehicle stopped to speak to the victim, but then took off after stating he was going to retrieve paperwork.

The Subaru sped off down Newport Avenue, Nunez said. The getaway was captured on Cabric’s cell phone.

“My initial reaction was like, I gotta chase this guy. So I tried following him, I made it like a mile down Newport Ave, and then my car died. My car just stopped. And he took off, went flying.”

Nunez called 911 and he and Cabric were taken to Sturdy Memorial Hospital for their injuries. His car was totaled. 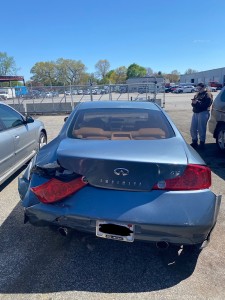 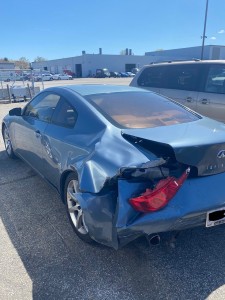 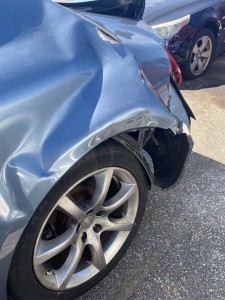 Now, with medical bills piling up and no car, the couple is hoping someone can help them find the driver responsible.

“I have no car, she got injured, I got injured, now I gotta do physical therapy, miss time off work, all that stuff,” said Nunez. “I just ask if anyone recognizes the car call the Attleboro police…even if you want to be anonymous or whatever, any information right now would help. Anything, anything would help cause right now we’re kinda just stuck.”

Attleboro police are investigating. Anyone with information is urged to contact the department at 508-222-1212 and are asked to use the reference case number 21-28461.