The news of the Johnson & Johnson pause announced just minutes before the meeting, catching officials off guard.

“Being less than an hour into that information, we definitely need to get together operationally and determine how best to adjust,” R.I. Department of Health Director Dr. Nicole Alexander-Scott said.

Dr. Alexander-Scott says the state has no reported cases of issues with the one-shot vaccine, but nonetheless, will pause its use while the FDA and CDC investigate reports of rare blood clots.

The state is working on alerting community partners and say that there were no Johnson & Johnson vaccines scheduled to be released today, so no appointments were affected by the pause.

Now, they’re working to figure out how this could impact the state’s future roll-out, as eligibility is expected to open April 19th to all Rhode Islanders 16+. 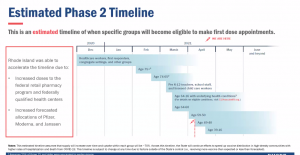 “I’m confident that as our team gets together and gets further information from federal officials, that our team will be able to make adjustments that are needed to keep things going,” Dr. Alexander-Scott said. 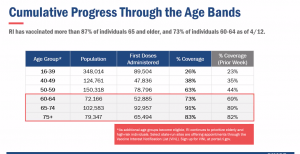 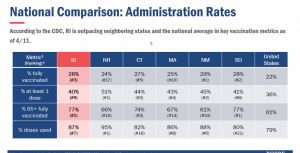 According to data from the Department of Health, vaccine distribution is moving smoothly in Rhode Island. More than 87% of people 65 and older are vaccinated and the number of younger people vaccinated is climbing week by week.

“Rhode Island is in the top 10 for every metric whereas some of the other states may have a very high ranking for one but then quite lower for another.”

But with the good news, comes caution as variants continue to spread. Dr. Philip Chan with the Department of Health says while there are variants of concern in Rhode Island, there are currently none that are highly resistant to the vaccine. 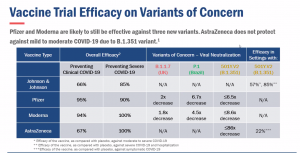 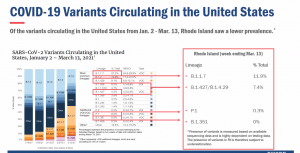 “The Pfizer and Moderna vaccine do appear to be effective against these variants as a general rule of thumb; although, there may be a slight decrease in efficacy,” Dr. Chan said.

The subcommittee also discussed the Pfizer vaccine trials in children as initial data shows the vaccine is 100% effective for 12 to 15 year-olds. Pfizer has officially submitted its request to the FDA to expand emergency authorization use to that age group. 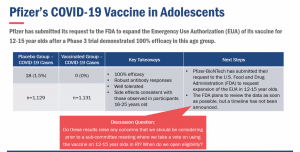 Local doctors in the COVID-19 Vaccine Subcommittee say, if approved, they feel confident in giving the vaccine to children in the Ocean State. The subcommittee plans to discuss how that roll-out would happen upon authorization.