CRANSTON, R.I. (WLNE) – Cranston police have made another arrest after a chaotic ATV incident on New Year’s Day involving the assault of a police officer.

Today, Danilo Corrales, of Central Falls was arrested on a warrant in Pawtucket.

According to Police, the 28-year-old knew officers have been searching for him for days.

They note Corrales was seen on video, riding a motorcycle alongside an officer trying to make an arrest in the road. He then kicked at that officer and drove away.

Once in custody today, Corrales admitted to his involvement of the incident and his assault on the police officer.

He was arraigned by a Justice of the Peace on the following charges: simple assault, obstructing an officer in execution of duty, disorderly conduct, reckless driving/eluding police, and driving with suspended license-5th offense.

His bail was set at $5,000 personal recognizance and will appear in Kent County District Court on April 8.

Cranston Police now have warrants out for Lisandro Galvin and Kuron Mitchell, pictured below, for their roles in the incident. 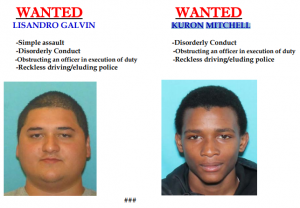 From North Attleboro High School to the Superbowl: a look back on Anthony Sherman's football career