CRANSTON, R.I. (WLNE)– Cranston police are looking for information on a suspect accused of robbing a Citizens Bank at 1850 Plainfield Pike earlier this afternoon.

Police say the suspect, who’s face was covered by surgical mask, handed the teller a note demanding cash, before leaving on foot toward the intersection of Plainfield Pike and Route 295. No weapon was displayed, and no one was hurt during the incident. There’s no word on the amount of money taken.

The suspect is described as a white male, approximately 5 feet 9 inches tall, and having a “stocky” build, although he may have been wearing baggy clothing. He was wearing a black Champion brand ball cap, and white sneakers with black laces, according to a police statement.

Any one with information is asked to contact Detective Robert Santagata at 401-477-5169 or rsantagata@cranstonpoliceri.com.

Tips can also be submitted anonymously through tipsoft.com or by utilizing  the Cranston Police Department smartphone app. 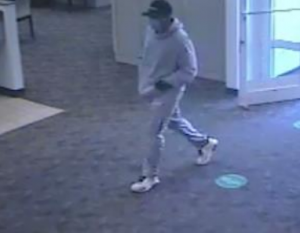