CRANSTON, R.I. (WLNE) – Students in Cranston are heading back into the classroom Tuesday, but because of a bus driver shortage, some may have trouble getting there. 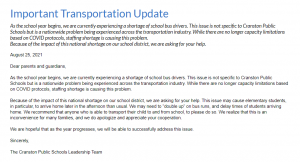 The Cranston School District posted to their website asking parents for help to get kids to school. Officials also said this might mean delays for some students getting home.

School officials stated the issue is not specific to Cranston, but a nationwide problem in the transportation industry.

“While there are no longer capacity limitations based on COVID protocols, staffing shortage is causing this problem.”

The district also asking for help from parents, stating, “We recommend that anyone who is able to transport their child to and from school, to please do so.”

This is a developing story. Stick with ABC 6 News for new updates.

FDA unlikely to rule on Merck's COVID pill before December