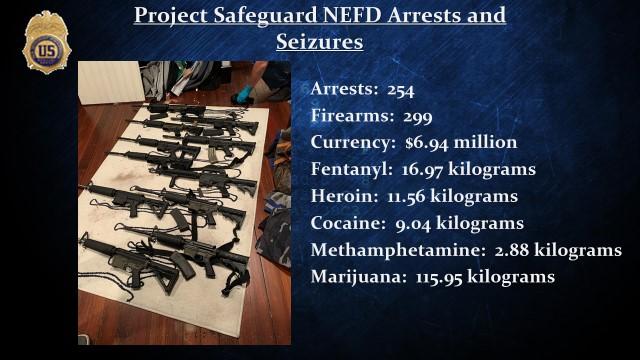 The initiative will be called Project Safeguard.

The DEA will identify and prioritize any ongoing drug trafficking investigations with a connection to violent crime.

“From the extreme levels of violence in Mexican cartels, to the open air drug markets in American cities, drug traffickers employ violence, fear, and intimidation to ply their trade.  Neighborhoods across our country are terrorized by violent drug trafficking organizations that have little regard for human life, and profit from the pain and suffering of our people. Along with our law enforcement partners, DEA is committed to safeguarding the health and safety of our communities,” he continued.

“Project Safeguard is an example of DEA’s dedication to working with our local, state and federal partners in identifying, targeting and investigating violent criminals who are involved in trafficking drugs and firearms,” said DEA Special Agent in Charge Brian D. Boyle.

“As we all know, drug trafficking in our communities, along with the gun and physical violence that often accompanies it, is a serious threat to our families and communities.  These crimes rob the neighborhoods of safety and hold law abiding citizens of New England hostage to drug fueled lawlessness.  This is unacceptable and will not be allowed to happen,” Boyle continued.

The DEA will work with federal, state, and local partners, including the Bureau of Alcohol, Tobacco, Firearms and Explosives and the U.S. Marshals Service in order to crack down on violent crime.

They’ll focus on three areas to to address growing violent crime threats in many cities across the United States:

Drug trafficking claims more than 70,000 American lives every year according to the DEA.

In recent months, violent crime has spiked in numerous cities and regions around the country, and drug trafficking is responsible, in part, for this violence.

Bishop Tobin kicks off 'Keep the Heat On' at St. Cecilia's School in Pawtucket