A dog owner is pleading with the public to cool it with the fireworks after her dog ran into oncoming traffic the other night after hearing them.

PAWTUCKET, R.I. (WLNE) – A dog owner is pleading with the public to cool it with the fireworks after her dog ran into oncoming traffic the other night after hearing them.

Lily the Goldendoodle is recovering after she was hit by a car on Cottage Street in Pawtucket early Sunday morning.

“To see her like that hurts,” said Owner Annette Diaz. “It just hurts.”

Diaz got home around 1 A.M. Sunday after a family emergency. She was with her youngest son who has Autism.

“I was still at the car and didn’t realize that my other son had opened the door,” said Diaz.

As he tried to enter the house, Diaz says fireworks started going off on the street over, spooking Lily and her other dogs who usually greet them at the door.

Lily was so scared she ran into the street and was hit by a car.

Fortunately Lily survived but she needed surgery on her leg. The veterinarian was able to save it but she had to have two screws and a plate put in. She’ll be sedated the next two months so she doesn’t walk on her leg and it can heal. 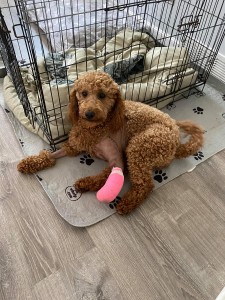 “When I went to pick her up – that I saw the severity, her whole leg! It was bad for me,” said Diaz. “Because I love my dogs, they’re like my kids!”

Now Diaz and her family  are asking for a reprieve from the constant popping and banging from the fireworks so the same thing doesn’t happen to anyone else’s dog.

“I ask the public to tone it down with the fireworks, said Diaz. “And at least let’s leave it for the Fourth of July. Because this has been going on for a while now. And it’s loud! And these are the consequences.”

Diaz says just in case, they’ll be fencing in their front yard.

Diaz’s friend started a GoFundMe to help with the vet bills.