On each delivery order, he attached a flyer to promote his Spotify profile.

While he delivered food for DoorDash, Brendan Rush decided he could promote his music at the same time.

On each delivery order, he attached a flyer that promoted his Spotify profile.

A customer took a picture of Rush’s flyer and tweeted it out. 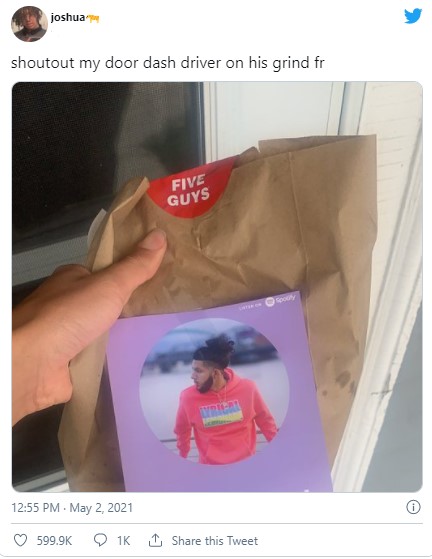 “I think that this approach is more old school, and people appreciate it. Everyone kind of forgot that this way existed,” Rush told ABC6. “Now, everything is through social media. But this is a hard copy. So, I think that’s the reason why it really worked.”

Rush told ABC6 the flyers grew his audience by almost 30,000 listeners. Additionally, his music has been streamed over 70,000 times and still growing.

Rush said multiple labels saw the tweet and listened to his music. Several have reached out to him about expanding his career.

Even the music streaming service, Spotify, acknowledged the virtual tweet, calling it ‘genius’.

Rush first got started in the music industry while playing a well-known video game called Fortnite. While playing, he said another player heard his music in the background and asked him who he was listening to.

That other player was a manager, who immediately took interested in Rush and helped boost his passion into a career. Rush said his manager was the one to initially gave him the idea to promote his music, while working simultaneously.

Rush credited his younger sister, Bella, for keeping him motivated throughout it all. According to him, she’s up next in the music world.

The Latest: Disney plans to restart fireworks shows at parks

France is sending a second Statue of Liberty to the US

One dead, one hospitalized after shooting in West Warwick