This is a developing story, check back for more information.

As of just after 8 p.m., Pawtucket Police tell ABC6 the hazmat incident ‘seems to be under control’ and that the risk of exposure to nearby homes is low.

The DEM confirmed to ABC6 that crews had been dispatched to an incident at 525 Narragansett Park Dr., Thursday afternoon around 5:15 p.m.

DEM response was on scene.

The ABC6 crew on the scene was told to back up from the facility because authorities “aren’t sure what’s in the air.”

A car of employees leaving Bio-Deteck, I spoke with some who tell me they got the ‘green light’ to leave after being checked out by EMS @ABC6 pic.twitter.com/EVPoLVgq6X

Officials set up a deacon tent on the scene for crews to be decontaminated inside. 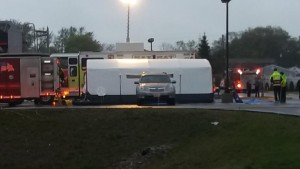 Crews lining up to get decontaminated @ABC6 pic.twitter.com/AK83Aph0MT

ABC6 received a statement from ZOLL, the company whose building the incident occurred at.

“The safety and health of our employees is our top priority,” said Elijah White, president of ZOLL Resuscitation.

“This building will remain closed to employees until we determine it is safe to return. Our thoughts are with our colleagues affected by this situation as we work with authorities to determine the cause.”

Here’s a statement from Zoll, the medical company, where the hazmat incident happened in Pawtucket.

At least 20 employees were taken to the hospital. The building will stay closed until it is deemed safe by officials. @ABC6 pic.twitter.com/OlbEOLEohN

This is a breaking story, more details will be added as they become available.