FALL RIVER, M.A. (WLNE) – The Fall River School Committee and Superintendent of Fall River Public Schools said in a joint statement that they have placed a middle school teacher on paid leave after allegedly making racist comments on social media.

On Friday June 5, an investigation was launched regarding a teacher from Matthew J. Kuss Middle School after allegedly making racist and bigoted comments on social media.

School officials began piecing together multiple screenshots of the posted comments by the teacher. As the investigation continued, the posts had been removed and deleted from Facebook.

It was decided to place the employee on paid administrative leave using the evidence that was obtained.

The employee was notified and informed, then placed on paid administrative leave without access to school information nor the school’s email system.

Fall River Mayor and School Committee Chair Paul Coogan said,  “They’ll end up talking to the young lady and see what she was thinking there’ll be an investigation and they’ll go forward from there.”

The statement provided details that this is an ongoing investigation, seeking fact.

Coogan, outraged added, “We don’t need that at all. I don’t care what time it is you don’t have to post anything like that related to anything race-based or in any way trying to lift one over the other. We don’t need that.”

“We can tell you that we are outraged by what we read from the Facebook screenshots, and we can confirm with conviction that the Fall River Public Schools do not tolerate any form of racist, bigoted, and/or hateful speech from any member of our professional community.” The joint statement read.

Further questions can be directed to Superintendent Matthew Malone at: 508-675-8420. 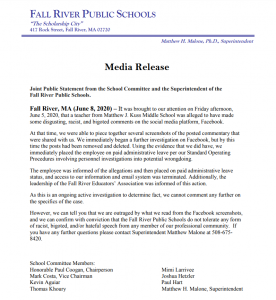