FALL RIVER, Mass. (WLNE) – The Fall River Police Department is facing backlash from community members after a controversial post was shared on their Facebook page.

The post, which was a share from another person’s account, referenced the trial of former Minneapolis cop Derek Chauvin, who was recently found guilty of murder in George Floyd’s death.

The post read: “Chauvin immediately stood and calmly placed his hands behind his back. Imagine where we’d be had George done the same.” 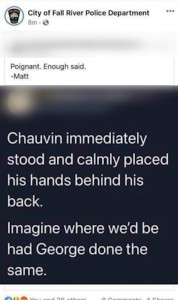 The Fall River Police Department deleted the post soon after and posted an apology saying it was a mistake done by a personnel member who meant to share it on their own personal account.

“It is with regret that the Fall River Police Department’s Facebook page was accessed by personnel who inadvertently re-posted an opinion that was meant for their own personal account. The posting in no way represents the opinion of the Chief of Police of the Fall River Police Department. We will continue our commitment toward transparency and building relationships with our community.”

That post has received more than 1,000 comments from community members, many criticizing the police department for the post.

“For every step forward it felt like that verdict had kind of brought us, seeing that posted on the City of Fall River Police Department’s page just made me feel like I was being dragged right back, our community and society just being dragged back,” Kate Levin said.

Levin also said she’s disappointed in the police department’s response, “The Fall River Police Department’s response fell far short. There are things the could have done to be more articulate. They could’ve started with an apology, not a regret. I don’t see those as equal. And they could have been much more clear about what they saw as inappropriate, why it was inappropriate, and what they want to do to be better.”

The Mayor of Fall River, Paul Coogan, said he was frustrated and disappointed and “question[s] the judgment of someone that would put something out there like that.”

“It’s totally 100% wrong and I apologize to anyone that was offended by this,” Mayor Coogan said. “We have no place for this here, I can’t stress that enough. It’s woefully lacking in judgment and I don’t know why anyone would put that on their personal page much less popping it over to the city page.”

Chief Jeff Cardoza has been diligently working to change the culture of the Fall River Police Department and I will personally be following up with the Chief to address lingering opinions like those shared today. While I am saddened by the harm that the statement has caused, it has reminded us of the hard work we have yet to do to create transparent, strong relationships between the FRPD and our community.

“Today, a member of this organization thought they were re-posting an opinion to their personal Facebook page. This individual is one of a few designated officers who has access to the Department’s official Facebook page. Today’s posting in no way reflects the beliefs of this organization. I am personally disappointed these attitudes exist. Through training, we have been and will continue to ensure our staff practices fair and impartial policing.

We will thoroughly investigate and address this incident, up to and including disciplinary action. Members of the Fall River Police Department will continue to work hard in service to all citizens of Fall River, and strive to build relationships based on mutual trust and respect.”

Mayor Coogan says he’s been in communication with the Chief of Police who says he plans to investigate.

“It goes against everything we’ve been trying to do since I came into office,” Mayor Coogan said. “We’re trying to build links between different community groups. This gentleman will be dealt with appropriately and going forward, maybe there’s a lot more work to do to look at people’s attitudes in the department.”