A viral social media post has been making it sound like your hand sanitizer could blow up in your car this summer.

PROVIDENCE, R.I. (WLNE) –  We’re all carrying a lot more hand sanitizer with us right now. Chances are you even have some in your car. But is it safe to keep in your vehicle as the weather gets warmer?

A viral post on the internet this week seemed to say differently. 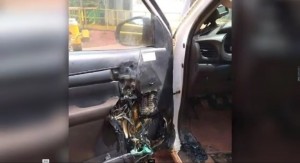 Chances are you’ve seen this image of a scorched car door circulating around social media. It came from a post by a fire department in Wisconsin talking about the dangers of keeping hand sanitizer, which is alcohol based, in a hot car.

The original post also mentioned it being particularly dangerous around an open flame. But the wrong information went viral on social media, leading people to believe your hand sanitizer would combust while sitting in your hot car.

But that car door wasn’t actually burned from a hand sanitizer explosion, but a random photo the department chose to show a burnt door.

“During the Covid-19 crisis there’s a lot of information put out over social media,” said O’Brien. “A lot of it’s bad.”

O’Brien, attempting to clear up any questions, posted to their department’s Facebook page Friday to try and put people at ease. He says hand sanitizer is highly unlikely to combust without an ignition source.

“If you’re pumping away on your hand sanitizer when you have a cigarette in your hand, you’re not being very smart, and you might get burned,” he explained.

Your average bottle of hand sanitizer likely says right on the back, ‘flammable, keep away from fire or flame.’
Chief O’Brien says in order for your hand sanitizer to spontaneously combust in your hot car this summer, your car would have to reach about 600 degrees.

“Living in the northeast, we’re not going to get temperatures in excess of 600 degrees in our cars,” he said.

The chief told ABC 6 not having the sanitizer in your car could in fact do more harm than good.

“I don’t want anybody to be fearful of having some hand sanitizer in their car,” said Chief O’Brien. “Because at the end
of the day when you’re going out in public, and as we go out in public even more, having that hand sanitizer will maybe prevent them from being sick or maybe infecting one of their family members.”