PROVIDENCE, R.I. (WLNE) – Flames and heavy smoke billowed from the third floor of a home on Douglas Avenue in Providence Sunday afternoon. 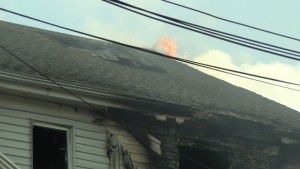 The Providence Fire Departments said they first received the call about the fire saying two people were trapped inside.

The two people managed to make their way out of the burning home before firefighters were on scene. No one was injured.

Firefighters ripped down parts of the siding of the home and folded a damaged American flag that hung in a window.

Deputy Assistant Chief Brian Mahoney said, “Get out if your house catches on fire. We had someone recently where they tried to put it out themselves, and there was a lot more fire when we arrived than there should have been. But they tried to fight it. Just get out, call 911, and we’ll do our job.”

The fire was successfully knocked out after about 20 minutes of battling the blaze. Firefighters are still investigating the cause.

Education leaders update R.I. Board of Ed. on return to school

Court papers: Woman wrote ‘give up’ in ricin note to Trump