A former New Bedford Public School employee is no longer employed by the school department after his comments on social media were brought to the attention of district leaders.

NEW BEDFORD, Mass. (WLNE) – A former New Bedford Public School employee is no longer employed by the school department after his comments on social media were brought to the attention of district leaders.

Peter Larkin, who was the attendance officer for New Bedford Public Schools (NBPS), commented on a Facebook post regarding a Black Lives Matter protest in New York City.

Larkin commented, “I would roll tanks and bulldozers. Mush any human in the way. Shoot everyone else. Pile up the bodies and burn them on national tv.” 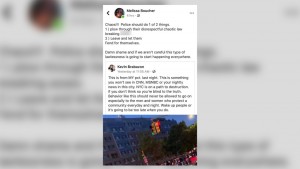 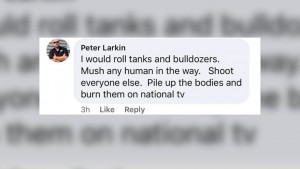 The post sparked outrage among parents in New Bedford, who sent Larkin’s comments to the school department and urged them to take action.

“Let me be clear — New Bedford Public Schools is an anti-racist organization that works to elevate and educate all members of our community. Individual comments that highlight or support acts of violence or demeaning behaviors are not representative of who we are in the New Bedford Public Schools district – and frankly we have no room for those whose detrimental behaviors in the name of free speech will limit our progress on behalf of the amazing students we have the honor to educate, inspire, and prepare for a multicultural world.”

Anderson added that he expects members of the NBPS team to “productively use their voice and platform to uplift and convey positivity on issues that are relevant to advancing equity for all people within our society.”

#UPDATE: A spokesperson for @NBPublicSchools confirms to me that Peter Larkin is no longer employed by NBPS. Below are his comments on a Facebook post about a BLM protest. @ABC6 pic.twitter.com/fydpUTdGuI

Arthur Motta, the spokesperson for NBPS, told ABC6 Thursday at Larkin was no longer employed by the school department.

When asked if the original poster, Melissa Boucher, was an employee of the school department, Motta replied that NBPS does not comment on ongoing investigations or personnel matters.

ABC6 contacted a number listed for Larkin but did not receive a response.

Others reached out to us to defend Larkin, saying he and his wife have done great things for the community.