The fire department says that crews responded to reports of a crash at about 2:15 a.m. where a vehicle was leaking gas and there were people with unknown injuries.

When crews arrived on the scene they found that the two car accident ended with a pole being struck and snapped at 366 Winthrop Street. 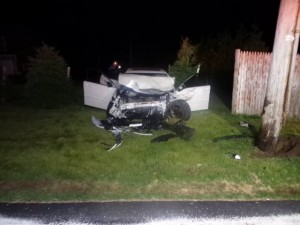 The four occupants involved were all taken to the hospital.

Rehoboth Police are investigating the crash.

This is a developing story, check back later for updates.