The department said in a Facebook post on Monday that two vehicles, and Audi and a GMC, had been ramming against each other while driving on Ridge Hill Road and South Main Street. The two vehicles continued to travel onto Route 24, when the Audi pulled up next to the GMC.

The passenger in the Audi pointed a handgun at the GMC. 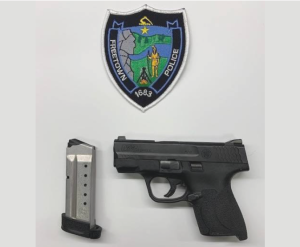 Officers were able to pull over the Audi in a nearby parking lot. The officers frisked the driver and found a semi-automatic handgun.

Police were able to listen to an audio record of the driver and passenger in the Audi, where the driver told the passenger to flash the handgun at the GMC.

The passenger of the Audi, 21-year-old Tyler Weigel, of Middleboro, was arrested and charged with assault by means of a dangerous weapon.

The driver of the Audi, 21-year-old Zachary Gallant, of Berkley was summoned to court on the following charges:

Police tracked down the GMC to a nearby location and talked to the occupants.

The driver of the GMC, 24-year-old Jared Eaton of Fall River was summoned to court for the following charges:

Community joins in support of family, first responders in Duxbury