NEW BEDFORD, Mass. (WLNE) – As the investigation continues into the fatal stabbing of an 18-year-old at a New Bedford park, we’re learning new details from his friends about what they claim led up to the murder.

Rayshard Normil-Jerome, 18, was found by a Massachusetts State Police trooper early Tuesday morning at Clasky Common Park suffering from multiple stab wounds. He was transported to St. Luke’s Hospital where he was pronounced dead shortly after 2 a.m.

So far two people have been charged in connection to his killing.

Latrell Baskin, 21, and a 16-year-old male have been charged with assault and battery with a dangerous weapon. Baskin is being held without bail and the 16-year-old appeared in juvenile court on Wednesday.

“I can’t believe it went this far,” said Demitri Boucher, a friend of Rayshard’s. “Ray was a great man. He did not deserve this. He was raising a kid, he was getting his life together.”

Boucher and another friend of Rayshard’s, Jordan Lemos, said the fatal stabbing followed a dispute over a dice game at a party.

“It started off with a party, and then it was over a dice game over like $10, and then they ended up jumping him and then he got stabbed,” Lemos said.

The teens claim the incident is connected to Saturday’s shooting at Monte’s Park in New Bedford that took place during a basketball tournament and injured one person.

.@ABC6 #EXCLUSIVE: Friends of Rayshard Normil-Jerome say his fatal stabbing started with a dispute over a dice game at a party.

They also say the stabbing is connected to Saturday's shooting at Monte Park in NB. More @ 5. pic.twitter.com/gtfRqK5z4X

“That’s where it connects,” said Boucher. “I was also there at the Monte’s Park, I was on my way to work as it happened, and I’d actually seen him get shot in front of my eyes. It was a bit traumatizing, shocked me at first. Then I talked to them about it, they told me how it was connected. Put it all together and it all led here.

“With what happened at that party where he got jumped, they tried to settle that, deal with that… (the) wrong person got involved, and all their members got into this.”

The Bristol County District Attorney’s Office did not respond to our request for comment on these claims.

“Ray was a good person. He was so positive all the time. He had his kid, he provided for his kid, he loved cooking. He just had a passion,” said Cassidy Riopelle, a friend of Rayshard’s. “We were just with him last week and it’s just crazy that he had to leave like this. He was only 18. He was such a positive person, he didn’t deserve any of this.”

A memorial now lies at the spot where the teen was found stabbed. 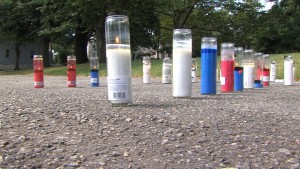 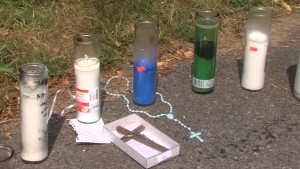 The DA’s Office has not yet announced any additional arrests.