George Floyd protests spark violence in cities across the U.S.

(ABC/CNN) – Protests in at least 30 U.S. cities have led to another night of violence in communities across the country.  The outrage was sparked by the death of George Floyd, a black man who died at the hands of a police officer in Minneapolis, Minnesota.

That officer, Derek Chauvin, who was seen in a video with his knee against Floyd’s neck, has been charged with third-degree murder and manslaughter.  Protesters say they want to see charges pressed against all four officers involved in the death of Floyd.

All four officers have been fired from their jobs, and the Department of Justice said their investigation of the incident is “top priority”.

Leaders of cities including Las Angeles, Atlanta, Chicago, Minneapolis, and Seattle have announced curfews tonight.  The mayor of Nashville has declared a State of Emergency. 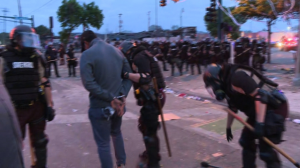