Nicholas Lourenco, 31, was arrested by detectives at around 7:30 a.m. at his home on Pine Orchard Road. 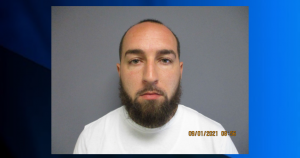 Investigators executed a search warrant and found 87 marijuana plants, 9.5 pounds of marijuana, as well as high grade THC butter/powder, cash, and three firearms, one of them being an AK-47.

He will be back in court on September 9.