Now the family is trying to figure out if those dogs have owners or not.

PAWTUCKET, R.I. (WLNE) – A family in Pawtucket is searching for the owners of two dogs they say violently attacked their small terrier who had been playing in their backyard Sunday afternoon.

Fortunately the dog, Rex, is expected to be okay. A Good Samaritan was able to step in in time and get the dogs out of the yard before things got any worse.

The two dogs are captured on video breaking through the shrubbery and fencing around the yard to get to Rex, who had been barking at them.

“And then it became like a horrifying animal screeching, yelling, just terrifying,” said White.

White’s mother, who was home at the time, soon discovered the attack in her yard and started screaming for help.

“We heard somebody kind of yelling, but we weren’t really sure and then it sounded like they were getting pretty hysterical,” said a Good Samaritan who came to Rex’s aid.

He asked to remain anonymous. He says he wasn’t thinking in the moment when he ran into the yard, but just knew he needed to help.

“This large dog had her dog by the neck. Pretty good grip on it, and then it started rag dolling it back and forth,” he said. “I thought it was pretty much over for that dog. That other dog was probably three or four times the size.”

The neighbor says he screamed at the dog who was holding Rex and smacked it with his baseball glove on the behind a few times, until he let go of him. Both dogs then ran out of the yard.

“This guy basically saved our dog’s life is what it comes down to. He was just fearless running in there. Otherwise, I don’t know what would have happened,” said White.

Now White says they want to know who the owners are or if the dogs even have owners.

“Please contact animal control, or the police, I assume you’re looking for your dogs,” said White. “We just want to know if they’ve been vaccinated, what’s going on, and I’m sure you want your dogs back.”

White says the vet told them it’s a miracle Rex is still alive, though they did have to shave his head because he had so many bites. 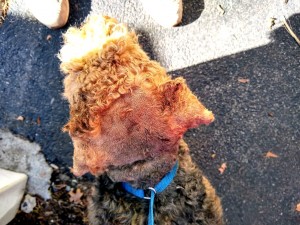 The family says they’ve reported this to Pawtucket Animal Control.

ABC 6 reached out to animal control to see if there was any update on the case, but we have not heard back.

If you recognize the dogs, you can contact police.

One dead after car crashes into Cranston home, police say