Governor Raimondo announces it is safe to begin Phase 3, but with new restrictions

PROVIDENCE, R.I. (WLNE) – Governor Raimondo announced in Monday’s coronavirus press briefing that the virus is still very much with us, but given the state’s closely tracked data the state is safe to begin Phase 3 operations starting Tuesday.

She said the virus is a very fluid situation, given what we have seen and are learning from other states around the county. Over the weekend, Rhode Island was listed as one of two states with a proven decline in new cases. Raimondo wants Rhode Island to continue to lead the nation and set an example for America to follow.

The governor continued saying, “If you stop following the rules, we are going to have to shut down the economy again.”  The United States has reached a new high in new coronavirus cases totaling about 45 thousand positive cases across the country on June 26 – the highest it has ever been. 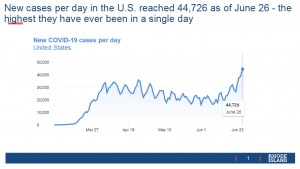 She asks that Rhode Islanders continue following guidelines and “Be part of the prevention, not part of an outbreak.”

States across the country are experiencing setbacks in reopening their economies because of people not following rules. Raimondo said, “I don’t want that kind of a setback to be our story.” She wants Rhode Island to continue advancing.

The governor provided a firm message saying, “If you are not following the rules, you are the reason and cause for an outbreak.”

A special message was also delivered to people in their 20’s as there has been a serious increase in cases over this past week. Cases in this age group are up 60 to 70 percent. Raimondo is calling on people of their 20’s, “We need you to do better and own your share of responsibility” she said. 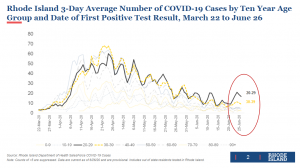 The governor went on to announce that Phase 3 will begin on Tuesday, along with some revised guidelines on social gatherings. Social gatherings should not exceed more than 25 people indoors and 50 people outdoors.

Weddings do have an exception… If you have a licensed caterer involved for your wedding, you may have 50 people attend an indoor wedding and 100 people attend an outdoor wedding. The governor expressed her sympathy and concern as she previously announced larger restrictions last week; and asks that if people with weddings planned for the month of July based on her previous guidance to call the Department of Business Regulations to work out a plan. 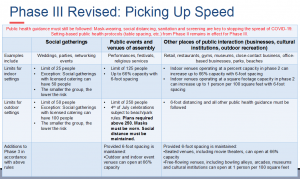 Any public festival or music event will be allowed to have 125 indoors and 250 outdoors. Event organizers are asked to submit a plan for their event and the governor is encouraging social distancing, mask wearing and screening be enforced.

With Fourth of July fast approaching, Raimondo says she does not want to see public events of over 250 people outside and wants plans submitted that show precautions in place.

She added that the state will be working closely with all town leaders as she wants everyone to enjoy the holiday and have a good time, but she is worried about an outbreak.

Bars in Rhode Island will continue to operate under Phase 2 restrictions. This includes seated service at tables only, no mingling, or being served in front of a bar.

Anyone traveling to Rhode Island from a state that has a 5 percent or greater positivity rate will be required to quarantine for 14 days. 23 states are currently on the list and will be updated weekly. Enforcement for this travel quarantine will be enforced with signage on Rhode Island highways, at the airport, in train stations and the state will be working with the local hospitality and tourism industry.

Governor Raimondo says it is safe to move to Phase 3 after evaluating the four indicators that were developed before testing in the state was advanced to where it is today. A fifth trigger relating to the number of cases being tracked in the state may be added to be evaluated as time progresses. 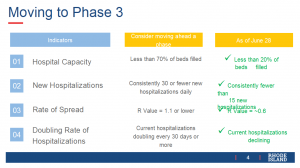 Since Sunday, only 16 new cases were reported. This being the fewest number of reported positive cases since the beginning of the pandemic.

Currently 73 people are hospitalized for the virus, with 15 of those hospitalizations in the ICU and 14 patients on a ventilator.

Rhode Island has tested 238,520 people since the pandemic began. Of those tested, 221,756 have tested negative and 16,764 have tested positive cumulatively.