For the second time in the same week, another Providence restaurant has been the victim of a scam by what appears to be the same customer.

PROVIDENCE, R.I. (WLNE) – For the second time in the same week, another Providence restaurant has been the victim of a scam by what appears to be the same customer.

Manager Edwin Sosa recognized the person seen on surveillance cameras at Opa, also on the cameras at his store.

After what happened with Opa, Grubhub told ABC 6 they had banned that diner from using their services, meaning he just made another fake profile.

The damage this time was $288 in stolen food.

The man, using another fake name and phone number, picked up his food and then later on complained to Grubhub that his order was incorrect, causing the service to issue him an automatic refund.

“I was checking the account and it already said, ‘The money will be refunded by Grubhub, paid by the restaurant,” said Manager of Meeting Street Cafe Edwin Sosa.

Sosa was on alert after seeing our original story. When he saw a pricey order was placed Wednesday night, he called his staff.

“I told her when he comes to pay for the order, can you ask for ID because we have a lot of scams going on right now?”

But Sosa says when the man picked up the food, he said it was something he was picking up for his boss, which is similar to what he told the staff at Opa. 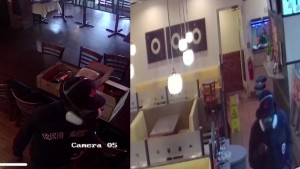 “It was exactly the same guy! Wearing the same mask, the same hat,” said Sosa.

At a time when restaurants are fighting to stay open, Sosa says he just doesn’t get it.

“We’re struggling paying our bills, paying our labor, we’re not making any money to pay everything. It’s really hard for us,” said Sosa. “That’s crazy. That’s unbelievable that people are still doing that.”

So how will Grubhub keep people from continuing to make fake profiles and scam restaurants?

In a statement they told us they’ve blocked the user profile that ordered from the Meeting Street Cafe, and that they are constantly working on new features to weed out fraudulent activity.

They also told us they will be issuing a refund to the cafe.

But Sosa says especially right now, there’s not much else they can do because they’re relying on services like Grubhub to keep their business alive.