The storm is expected to make landfall along the Louisiana coast on Sunday as a major hurricane. 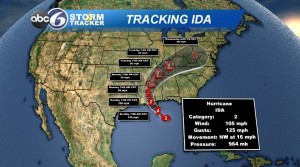 The Gulf Coast is bracing for Hurricane Ida, expected to impact that area on Sunday.  As of the latest update from the National Hurricane Center (11pm eastern time on Saturday), Ida is a category 2 hurricane with sustained winds of 105 mph, gusting to 125 mph.  The storm is gaining strength as it crosses the Gulf of Mexico on its way toward the Louisiana coast.  The storm is expected to make landfall along the Louisiana coast on Sunday.  Coincidentally, Sunday is also the 16th anniversary of Hurricane Katrina’s devastating landfall in the same area (pictured below): 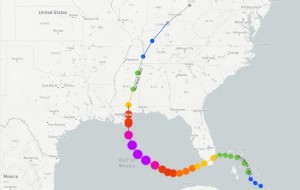 Conditions will deteriorate along the Gulf Coast on Sunday as Ida approaches, including the New Orleans area.  The latest forecast track projects the center of the storm making landfall on Sunday as a major category 4 hurricane.  As the storm approaches and makes landfall, there is a danger of life-threatening storm surge along the Louisiana and Mississippi coasts, with storm surge inundation reaching as high at 9 feet in places.  Life-threatening flooding from heavy rainfall is also possible, as well as catastrophic wind damage, especially closest to the center of storm. Officials have been urging residents to complete preparations today, and in some cases, to evacuate.

The storm will weaken after it makes landfall, but could produce flooding rains as it moves inland.  As for southern New England, Ida is not an immediate concern at this point.  However, the remnant moisture from the storm could play a role in our forecast by Wednesday and Thursday, and may produce widespread heavy rainfall.  Stay with ABC6 for forecast updates through the week.