‘He had the biggest heart’: Loved ones mourn father of three killed in Taunton crash

TAUNTON, Mass. (WLNE) – Friends and family of a Taunton man killed in a motor vehicle crash on Wednesday night are remembering him as a funny and loving father of three, who was loved by everyone who knew him.

Christopher Silva, 32, was behind the wheel of his Honda Civic traveling north on Tremont Street just after 9:00 p.m. when police say he struck a Chevy Silverado traveling south. The driver of that pickup truck, a 29-year-old woman from Taunton, was turning left into the Trucchi’s Supermarket parking lot, according to police.

The female driver sustained minor injuries. Christopher was rushed to Morton Hospital, where he was later pronounced dead. 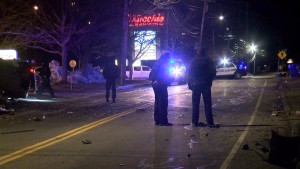 “I feel like my heart’s been ripped out of my chest,” said Joanne Silva, Christopher’s mom. “I mean, you never think you’re gonna lose your child. A parent shouldn’t have to bury their child ever. He was supposed to be going home, and he never made it home.”

Joanne said she learned of the crash from Christopher’s longtime partner and the mother of his children, Stephanie Barth. Barth was in New Hampshire at the time when she got a phone call from a friend who lives near where the crash happened.

“(They) called her and said, ‘I think the car is Christopher’s.’ We weren’t sure at first, and then finally they called me back like an hour later and said that it was my son’s car.”

Joanne rushed to the hospital and waited several hours to find out if he survived.

“We’re thinking, oh, he’s a big guy, you know, he’ll survive. He might have bumps and bruises, whatever. I can deal with it, if he’s paralyzed, I’ll take care of him. I don’t care. And they told me he didn’t make it.”

“I just didn’t believe it. I just couldn’t believe it,” said the mother of his children, Stephanie Barth. “It’s just hard because I just want him to answer the phone. I just don’t want to believe it.”

Not even 24 hours after losing Christopher, the family suffered another loss. His aunt died of an overdose.

“They were real close,” Joanne said of her son and her sister. “She had been struggling with a drug addiction.”

Christopher was working as a mechanic at his shop in Carver. Now, his family hopes to keep his memory alive through what he loved the most.

“We are thinking about building him a race car in his name,” Barth said, “and teaching my daughter how to drive.”

No charges have been filed against the driver of the pickup truck. The investigation is ongoing between Taunton Police and Massachusetts State Police.

“He had the biggest heart,” said his mother. “He always made people laugh, he was real funny. I mean, he just loved everybody.”

Silva, a mechanic, was driving his Honda Civic just after 9 p.m. Wednesday when he collided with a Chevy Silverado turning into the supermarket parking lot. The driver of the pickup truck was minorly injured – Silva didn't survive.

Community joins in support of family, first responders in Duxbury