BRISTOL, R.I. (WLNE) – Parents in the Bristol-Warren School district say they’re concerned about the lack of leadership amidst rumors that the Interim Superintendent resigned.

Wednesday morning, ABC 6 News reached out to the Bristol Warren School District for comment, but did not hear back. Chairman of the school committee, Marjorie McBride said she “had no comment at this time”.

ABC 6 News emailed Interim Superintendent Hicks and received an automated response saying, “This is no longer the email of BWRSD superintendent.” 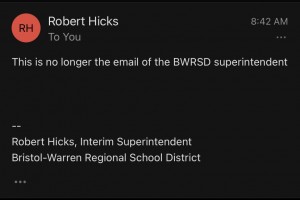 “Here we are again with a leaderless district and at a time when we really need it most,” Daryl Gould, parent of the Bristol Warren School District said. “There are a lot of major issues we’re facing that directly impact the education we’re delivering to the kids.”

Gould, father of three in the district, says parents are fed up. Without Hicks, the district is now left searching for its fifth superintendent in the past two years.

“There’s certainly a level of embarrassment and probably a little bit of confusion on the part of parents,” Gould said. “I know how difficult it is for parents to be engaged at a level you need to be to really understand what’s going on in our districts. So, if surface level all you see is all this turnover, it’s certainly embarrassing for our district and towns.”

Gould says parents were told Hicks was never supposed to fill the role permanently and that he would help in the hiring process moving forward for a permanent replacement.

“There’s a lot of focus on the noise,” Gould said. “Our district spent a lot of time focusing on rules and mandates and religious holidays where at the end of the day we’re not doing the core function of what our schools exist for, which is educating our kids.”

There’s no word yet on who would take over in the absence of Interim Superintendent Hicks. Last time, Assistant Superintendent Dianna Sanna took the reigns temporarily.

Custodian honored for saving life of student in Bristol