WARWICK, R.I. (WLNE) — A man was charged with a DUI after a hit-and-run on Interstate 95 north in Warwick over the weekend.

The crashed happened near exit 10 just before 2:30 p.m. Sunday and backed up traffic.

Bernardo was charged with the following:

Cameras from the Rhode Island Department of Transportation showed the traffic jam spanning at least a half mile. 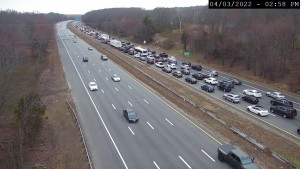 State police said that in the traffic, there were two more minor crashes.

In the backed up traffic there were 2 more minor crashes

No injuries reported as a result of any of the crashes pic.twitter.com/2Uu04tU9h5

No one was injured in any of the crashes, state police said.

Some worry contraceptives are next, after Roe V. Wade is overturned