Homeless kitten looking for place to live after surgery

BOSTON, MASS (WLNE) – Five-month-old Hopscotch may not have lived to see his first birthday if he wasn’t taken off the streets and given a second chance.

Hopscotch was found on the streets of Springfield by an Animal Control officer on August 29th, barely able to walk.

The kitten was rushed to the MSPCA-Angell in Boston where X-rays showed severe fractures to both humerus bones in his front legs.

“I cannot recall ever seeing a kitten injured so badly, with severe fractures to both of his humerus bones”, said Mike Keiley, director of the adoption center and programs at the MSPCA-Angell.

Keily also described the injuries as “baffling and horrifying.”

According to the MSPCA, the organization has never seen fractures in a cat to that extent.

“It’s possible he was hit by a car, fell from a significant height, or that someone harmed him intentionally—we’ll just never know for sure,” said Keiley.

Hopscotch underwent surgery on August 31st, in which steel plates were inserted in both legs to facilitate the healing process.

After surgery, Hopscotch was sent to Nevins Farm for recovery where Keiley says he remains playful, loving, and social.

Interested adopters can email methuen@mspca.org for more information about the adoption process. 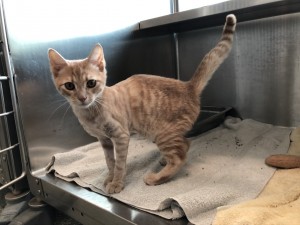