TAUNTON, M.A. (WLNE) — Middle school students at Parker Middle School in Taunton got to ice skate on Monday, some for the first time.

This activity is part of a larger program at the school, called PBIS/News Combers Academy.

Positive Behavior Intervention System rewards students for their positive behaviors, rather than punishing them for negative ones, said Brittany Moore, school counselor at the middle school.

The Newcomers Program was implemented in 2017, assisting students who have entered the country within the past year and those who are English-learning.

Since 2018, the PBIS program has hosted an event every month to build culture within the school.

Moore said these events have been successful in their schools so far.

“I think that inclusivity in our building is something that we really push for amongst all of our students and I think as a staff as well, we really try to just do a lot of professional development around inclusivity and cultural awareness,” said Moore. “Which is awesome, and I think that we are also than able to, when we as a staff are inclusive, the students can see that and kind of mimic that as well.” 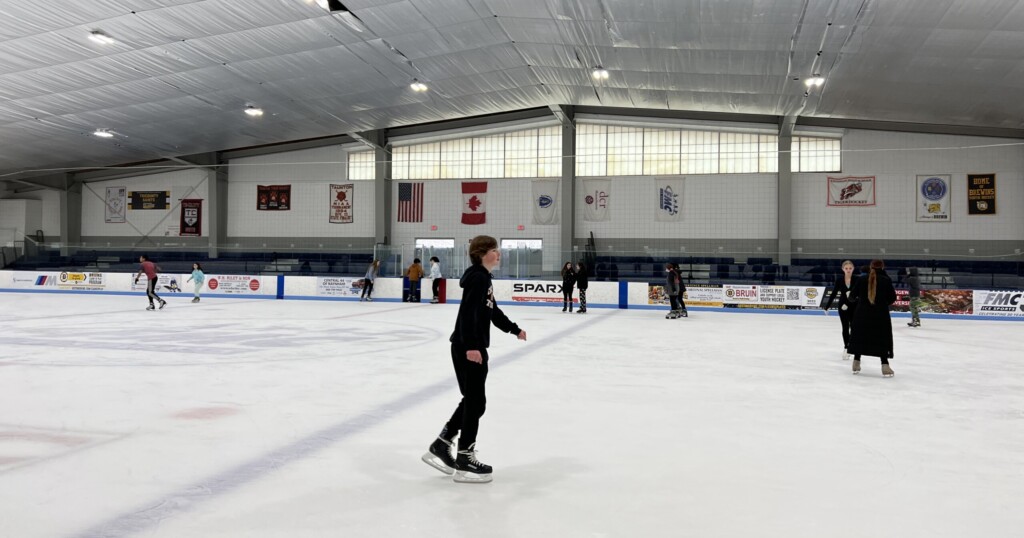 This is a photo of some students ice skating.

The students feel the same way, one adding, “Most of the kids are really cool, like, I remember this one kid name Gustavo,” with students than joining in saying, “I love Gustavo!”

Another student added, “You get to know new people from other parts of the world.”

Moore translated for some Newcomer students, one saying “Everybody is really cool, and everybody helps me a lot in school.”

The ice skating program has run every year since 2018, partnering with members of the Taunton Police Department and the Taunton High School Varsity Hockey Team, where the varsity team helps the middle schoolers skate.

Officer DeOliveira and the senior hockey team spoke about the importance of the event.

“They go out and they bond, and it kind of gets the kids ready to see that “alright high school’s not so bad when I go”, and it kind of takes that fear out of them,” said DeOliveira.

The middle schoolers added to this saying, “It helps better to know that like not all high schoolers are mean, a lot of them are nice, but they’re just big and tall so its intimidating but when you learn to know them they’re nice.”

The event concluded with many happy smiles, and students excited for the next event.