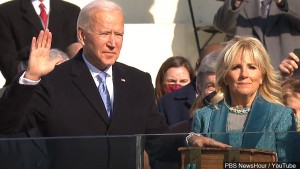 WASHINGTON (AP) – Joe Biden has sworn the oath of office to become the 46th president of the United States, declaring that “democracy has prevailed.”

He takes the helm of a deeply divided nation and inherits a confluence of crises arguably greater than any faced by his predecessors. But there were comforting signs of tradition for the hallowed American democratic rite now underway at a U.S. Capitol battered by an insurrectionist siege just two weeks ago.

On a chilly Washington day dotted with snow flurries, a bipartisan trio of ex-presidents along with the elite of nation’s government gathered for the ceremony.

Shortly before President Biden took the oath, Vice President Kamala Harris broke the barrier that has kept men at the top of American power for more than two centuries. 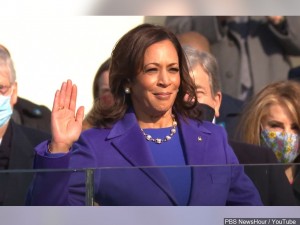 The former California senator took the oath of office Wednesday, making her the first female vice president in the nation’s history, as well as the first Black woman and first person of South Asian descent to hold the position. She’s expected to deliver remarks late Wednesday at the Lincoln Memorial, a symbolic choice during a deeply divided period in the nation’s history.

She was sworn in by Supreme Court Justice Sonia Sotomayor and took her oath on a Bible that once belonged to Justice Thurgood Marshall.

Driver in crash that took life of off-duty officer arraigned