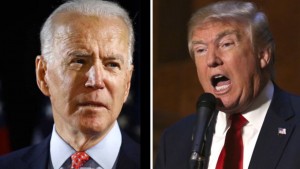 WASHINGTON (AP) – The Latest on Congress’ tally of the Electoral College vote won by Joe Biden (all times local):

3:30 p.m.
One person has been shot at the U.S. Capitol as dozens of supporters of President Donald Trump stormed the building and violently clashed with police.
That’s according to a person familiar with the matter who spoke to The Associated Press on Wednesday on condition of anonymity amid a chaotic situation.
The exact circumstances surrounding the shooting were unclear. The person said the victim had been taken to a hospital. Their condition was not known.
The shooting came as dozens of Trump supporters breached security perimeters and entered the U.S. Capitol as Congress was meeting, expected to vote and affirm Joe Biden’s presidential win. Trump has riled up his supporters by falsely claiming widespread voter fraud to explain his loss.
___

3:25 p.m.
President Donald Trump is encouraging supporters occupying the U.S. Capitol to “remain peaceful,” but he is not calling for them to disperse.
As he faced growing pressure from allies to condemn the violence Wednesday afternoon, Trump tweeted, “No violence!” adding: “Remember, WE are the Party of Law & Order – respect the Law and our great men and women in Blue.”
But Trump did not ask supporters to vacate the area as the unrest continued.
Trump had appeared earlier at a rally and had urged his supporters to march to the Capitol _ at one point even suggesting he would join them. He is upset that he lost the presidential election to Democrat Joe Biden and has falsely claimed voter fraud to explain it away.
He also urged his supporters to “get rid of the weak Congress people” _ presumably through primary challenges _ saying, “get the weak ones get out; this is the time for strength.”
___
3:15 p.m.
A Defense Department official says Washington, D.C., has requested an additional 200 National Guard members as supporters of President Donald Trump violently clash with law enforcement at the Capitol.
That request is currently under review at the Pentagon to determine how the Guard can respond to support law enforcement.
According to officials, the Guard members have a very specific mission that does not include putting military at the Capitol. Instead, the Guard must be used to backfill law enforcement outside the Capitol complex, freeing up more law enforcement to respond to the Capitol.
Officials said the request for more National Guard has not been rejected.
Trump had urged his supporters to come to Washington to protest Congress’ formal approval of President-elect Joe Biden’s win. Several Republican lawmakers backed his calls, despite there being no evidence of fraud or wrongdoing in the election.
___
3:10 p.m.
Pressure is mounting on President Donald Trump to condemn supporters who are violently clashing with law enforcement on Capitol Hill. Among those urging Trump to act: his former communications director, Alyssa Farah, who tweeted that Trump should “Condemn this now.”
She says, “you are the only one they will listen to. For our country!”
Dozens of people have breached security perimeters at the Capitol, forcing the lockdown of the building and halting the vote to certify Joe Biden’s presidential victory.
Trump has so far offered a single tweet asking his supporters to “Please support our Capitol Police and Law Enforcement. They are truly on the side of our Country. Stay peaceful!”
His former chief of staff Mick Mulvaney tweeted: “The President’s tweet is not enough. He can stop this now and needs to do exactly that. Tell these folks to go home.”
His lawyer, Rudy Giuliani, also addressed Trump supporters in a tweet, calling them the “patriots challenging the fraudulent election” and telling them that ”POTUS wants you to EXPRESS YOUR OPINION PEACEFULLY.”
___
3 p.m.
Protesters backing President Donald Trump have breached the U.S. Capitol, forcing a delay in the constitutional process to affirm Joe Biden’s victory in the November election. Trump urged his supporters to come to Washington to protest Congress’ formal approval of Biden’s win. Several Republican lawmakers have backed his calls, despite there being no evidence of fraud or wrongdoing in the election.
Protesters are now inside the Senate chamber. One got up on the dais and yelled “Trump won that election.”
Several dozen are roaming through the halls, yelling, “Where are they?”
Some were also in the visitors’ galleries.

1:55 p.m.
The Senate’s top Republican has told his colleagues that Congress should not override the voters’ verdict in electing Democrat Joe Biden president, saying, “If we overrule them we will damage our republic forever.”
The Kentucky Republican made his remarks as the Senate weighed a challenge by a handful of GOP lawmakers to the 11 electoral votes Arizona cast for Biden. It was the first of several states’ electoral votes that some Republicans are challenging, encouraged by President Donald Trump’s groundless charges that the election was riddled with fraud. Congress seems certain to reject all those challenges on Wednesday and formally certify Biden’s victory.
McConnell says while all elections have irregularities, they weren’t “anywhere near the massive scale that would have tipped the entire election.” He says Congress should not declare itself “a national board of elections on steroids,” and says reversing the election results would push the country’s democratic institutions toward “a death spiral.”

Republicans from the House and Senate have objected to the counting of Arizona’s electoral vote, forcing votes in both chambers on Joe Biden’s victory in the state.
The objection was made by Arizona Rep. Paul Gosar and was signed by Texas Sen. Ted Cruz. Both are Republicans. The two chambers now have two hours to debate the challenge.Biden won the state by more than 10,000 votes. In all, eight lawsuits challenging Biden’s Arizona win have failed, in part over a lack of evidence.
The state’s Supreme Court on Wednesday upheld the dismissal of an election challenge, because the plaintiff lacked the right to bring the suit in the first place. The woman wasn’t a registered voter when she sued.
Arizona Secretary of State Katie Hobbs, a Democrat, has said there were no irregularities with the vote in her state.
___
1:15 p.m.
President Donald Trump is taking aim at Republican members of Congress who have refused to join him in his effort to contest the results of the November election he lost to President-elect Joe Biden.
Trump on Wednesday told a large crowd of supporters gathered on the Ellipse that they needed to vote these Republicans out of office by putting up challengers in primary elections to push them out. “If they don’t fight, we have to primary the hell out of the ones that don’t fight,” Trump said, calling the Republicans who aren’t siding with him “weak.” Earlier, he named and praised Republicans who have pledged to contest the electoral votes of some states when they come up for approval on Capitol Hill. His supporters, who braved chilly, windy conditions, chanted “Fight for Trump!” ___
1:10 p.m.
Congress has begun a joint session to count and confirm the Electoral College vote won by Joe Biden.
With supporters of President Donald Trump gathering around the Capitol, more than a dozen Republican senators and more than 100 Republican House members have said they will object to the count from as many as six battleground states. They are echoing Trump’s false claims of widespread fraud. Their efforts are almost certain to fail as many Republicans have said they will oppose the objections. But the session is expected to last into the night on Wednesday as the House and Senate must consider each objection separately and vote on whether to sustain it. Vice President Mike Pence will preside over the session. He has no power to overturn the results, despite pressure from Trump to do so. Biden won the Electoral College 306-232. He is set to be inaugurated Jan. 20.
___
1 p.m.
Vice President Mike Pence is defying President Donald Trump, saying he does not have the unilateral ability to discard electoral votes that will make Joe Biden president on Jan. 20.
Pence, in a statement issued minutes before he was to begin presiding over a joint session of Congress to count electoral votes, said, “It is my considered judgement that my oath to support and defend the Constitution constrains me from claiming unilateral authority to determine which electoral votes should be counted and which should not.”
Trump has pressured his vice president to toss electors from battleground states that voted for Biden during the session.