BOSTON (AP) — Jon Lester says there was nothing but rosin – which is perfectly legal – on his glove when he beat the St. Louis Cardinals in Game 1 of the World Series.

The Boston Red Sox
left-hander said before Game 2 on Thursday night that ''I can honestly
tell you that all I use is rosin. So, it's obviously frustrating that
after a night like last night, we should be having fun and running
around with some energy today and I've got to stand here and answer
questions about it.''

Lester allowed five hits in 7 2-3 scoreless innings with eight strikeouts and a walk in the Red Sox's 8-1 victory.

Boston manager John Farrell also said Lester uses only rosin, which is provided on the pitcher's mound, to get a better grip.

''If you know Jon Lester, he sweats like a pig and he needs rosin,''
Farrell said before Game 2. ''I don't see this as anything at all.''

Major
League Baseball said in a statement Thursday that ''we cannot draw any
conclusions from this video. There were no complaints from the Cardinals
and the umpires never detected anything indicating a foreign substance
throughout the game.''

Section 8.02 of the Official Baseball Rules
says a pitcher ''shall not apply a foreign substance of any kind to the
ball'' and says the penalty for a violation is ejection and an
automatic suspension.

''MLB has obviously evaluated it and issued a statement,'' Farrell said. ''We consider it closed.'' 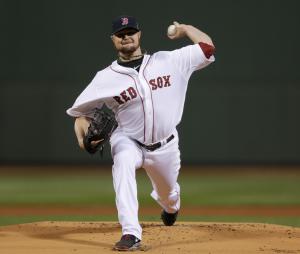 ''Obviously,
when I get a text at 2 o'clock in the morning, it's not fun,'' a
composed Lester said. ''I understand. I saw the picture. It looks bad.''

He also said he sweats a lot and rosin helps control that.

''I
throw rosin in my glove. That's it,'' Lester said. ''I warm up with one
hat in the bullpen and then have to change hats when I come in (to the
dugout). I've had plenty of games where I've got sweat dripping off my
brim. I've put rosin on my hat before to try to stop it. You do a lot of
different things to just try to try to contain it.

''Even on a
cold night like last night, I'm still sweating, so you've got to do
certain things to try to keep a grip on the ball and not let it slip,
and rosin is one of those things that seems to help me.''

Asked if
he's sure that rosin was the only substance in Lester's glove,
Cardinals manager Mike Matheny said, ''this was not instigated by us.
And the way that we approach this is we just play the game. We don't
deny that some things have been acknowledged. And if that's what he
claims, then that's what it is. That's all there is to it. And right now
it's pretty much a dead issue.''

Lester said the issue wouldn't affect him in the future.

''I
played with Jon basically my whole professional career,'' Red Sox
second baseman Dustin Pedroia said. ''He kind of sweats a lot, man. I
know he loads up with rosin all over the place. I don't even like going
out there and telling him 'good job,' and patting him on the back
because you get all wet and stuff.''