Local Brewery Says ‘KNOCK IT OFF’

This is in partnership with Frog and Toad who originally started selling the 'knock it off' shirts.

Proclamation Ale created this beer in collaboration with Frog and Toad, a local retailer who originally started selling the ‘Knock it Off’ shirts.

The brewery says the new beer is a double IPA  with notes of lime popsicle, peach, Mello Yello, and tangelo.

$2 from every 4-pack sold of this beer will be donated to the Rhode Island Foundation’s COVID-19 Response Fund.

The beer is available for pre-order for curbside pick-up starting Saturday at 3:00 pm.

Those wishing to order may do so on Proclamation Ale’s website. 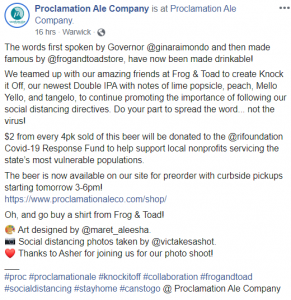