The act will help couples who rely on assistive reproductive technology who were previously required to adopt their own children in the past. The non-birth parent was not recognized as the child’s parent under the old law.

The bill Governor Raimondo signed today will allow LGBTQ couples to voluntarily acknowledge parentage once their child is born. The old law was looked at as discriminatory. 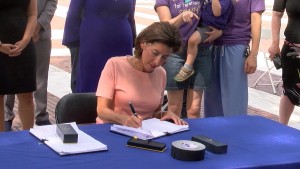 Raimondo said, “It’s so children can grow up in a loving home. So that we the people of Rhode Island can unify behind the basic core values of equity, equality, love, and freedom.”

ABC 6 News spoke to a local couple who say they feel like their family is finally validated.

Sara Watson says she is just like any other parent, “I sit around feed my kid gummy worms and watch him roll around in the dirt in the backyard. All I wanted was to be his parent legally.”

She and her partner, Anna Ford, had their son Eli three-and-a-half years ago through assisted reproduction.

Watson said, ”We drew up an agreement ahead of time that said we were both joint owners of any embryos. We consulted a lawyer in advance to make sure that we would both be legal parents.”

“I couldn’t add him to my insurance, pick him up from daycare. If Anna had died, he could have potentially went into the foster care system.”

The process to become Eli’s legal parent was not easy or quick. Watson had to adopt her own son, and it took 8 months.

The couple is hopeful for what this new act means for same-sex couples going forward.

“I’m so thankful that all of the other families in Rhode Island won’t have to worry about whether they’re established as a parent. It would just be a right, right from the time their kids are born.”

How the Wiley Center is helping Rhode Islanders this Giving Tuesday