The police chief says four cars have been stolen from the town since June 13. He says that's usually how many are stolen in a  whole year.

The police chief says four cars have been stolen from the town since June 13. He says that’s usually how many are stolen in a  whole year.

“Most people are in bed 11, 12 o’clock, they think the car was still in their driveway at least when they came home,” said Chief Shawn Lacey. “And then when they woke up at 6, 7 in the morning there was no car in their driveway.”

All of the cars stolen were unlocked and had the keys inside. Some even had valuables inside.

“There was four cars stolen in one night, Saturday night, between Stonington and Westerly,” explained Lacey. “It’s just too much of a coincidence.”

Taylor Husereau was in the process of moving back to Westerly from nearby Voluntown, Conn. when she says her car was stolen two weeks ago.

“I had all my valuables in it and my spare set of keys because I was moving,” said Husereau. “I never keep my spare keys in there!”

At 2 A.M. she heard a car starting and looked out her window.

“I saw my car pointed up the road with the lights on and it was then driving away right up the road,” Husereau recalled. “I just started screaming ‘My car! My car!'”

It turned up two days later in East Hartford, but it was totaled. 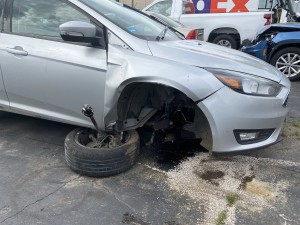 “It looked like they were just doing e-brake slides and donuts and everything like that,” said Husereau. “Definitely lock your cars. Make sure you don’t have your keys in it, any valuables.”

None of the more recent cars stolen from Westerly have been found.

Beach in Westport closed due to Portuguese men-of-war sightings