BARNSTABLE, Mass. (WLNE) Massachusetts State Police are seeking a suspect wanted in connection to the shooting of a trooper on Cape Cod last week.

Trooper John Lennon was shot during a traffic stop on Camp Street in Hyannis Friday night.

The 28-year-old rookie has since been released from the hospital.

Police have identified Andre Sterling, a native of Jamaica, as the alleged shooter in that incident.

Sterling is described as having a scar on his left hand.

He should be considered armed and dangerous, police said.

Anyone who may have information on his whereabouts is asked to call the State Police Fugitive Apprehension Section at 1-800-KAPTURE (1-800-527-8873). 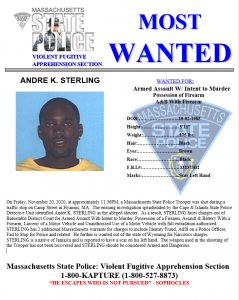