NORTH SMITHFIELD, R.I (WLNE)  – A Woonsocket man is charged following an altercation with a 16-year-old Walmart employee over a face mask on Tuesday.

The victim, Hunter Shaw, says he’s still in shock over what happened.

“I’m pretty traumatized. I still currently have anxiety running through me.”

According to Hunter Shaw, who is the son of Cumberland Town Councilor Bob Shaw, he says it started off as an average day of work. He’s only worked at Walmart for about two weeks and was walking the aisles when he noticed a child not wearing a mask.

“Going by what I’m told, I had to walk up to them and confront them and tell them they had to put a mask on their child,” Hunter said. “They immediately started saying how they don’t put a mask on their 2-year-old and it’s not right. I said I was going to grab a manager for them to clear things up for everybody.”

Hunter says he walked away and laughed. That’s when police say 34-year-old Michael Caro attacked him and took off.

“He walked up to me and got in my face and then proceeded to choke me, throw me against the shelves, and punch me in the jaw,” Hunter said. “I was in a huge state of shock. I couldn’t do anything, I couldn’t move or feel anything, I was just shocked.”

His father says he made it his mission to find the person responsible and posted it on Facebook. 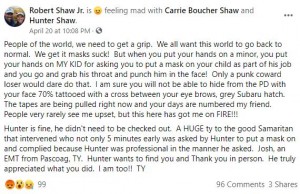 “You don’t expect to get a phone call from your child saying I’ve just been assaulted,” Shaw said. “You hear stories all over the country, the incidents that have happened, and you never think what you will feel if it happened to you.”

After three days, an anonymous tip led police to Caro, charging him with simple assault/battery and disorderly conduct.

Police say the employee had visible bruises and complaints of pain but did not seek medical treatment.

Shaw says he also thinks Walmart should change their policy on who enforces mask-wearing. He believes that job should be done by security or someone who’s trained to deal with tough situations like that.

In a statement, a spokesperson for Walmart said, “We’re deeply disturbed by Tuesday’s incident. Acts of violence are uncalled for and will not be tolerated in our stores. We are thankful the situation has been resolved.”

We're months away from recreational marijuana sales in Rhode Island, but are pot shops ready?