Marshall Development moves to “Plan B” on Metacomet redevelopment

The country club dates back to 1901 and sits on over 100 acres of land along Veterans Memorial Parkway in East Providence.

The zone change would have allowed the company to transform the golf course into a work-live-play development with more than 50% of the property remaining as green space for the public to use.

However, after continuous pushback from residents demanding the golf course remain untouched, Marshall Development announced it is abandoning its initial plan and moving onto “Plan B,” which does not include any public green space. 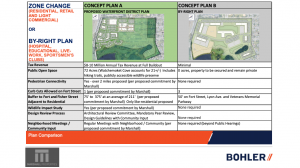 Marshall Development tried tirelessly to facilitate a constructive dialogue with the community on the benefits of redeveloping Metacomet in accordance with this vision – which would keep over 50% of the property green and accessible to the public. Despite great efforts to stimulate a productive discussion, there was very little constructive dialogue. Instead, rumor and misinformation ruled the day.

The City Council is still scheduled to meet via Zoom at 6:00 p.m. to discuss Marshall Development’s plan, but there will be no vote.