We have been in a very dry stretch since the flooding rains of late-March. Roughly 3.5″ of rain has fallen in the past seven weeks. That is about 57% of what we would normally see in that time period.

The dry stretch is going to be interrupted Tuesday night into Wednesday as a moisture-laden storm spins up east of Cape Hatteras, N.C. The storm will track just southeast of Southern New England, and we stand to get a good soaking – with the heaviest rain coming late Tuesday night through the Wednesday morning commute. 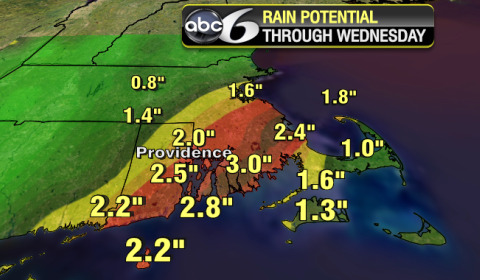 The projected rain totals are 1-3″. This will most likely not be enough for any river or stream flooding, but it should be enough to lead to some ponding on the roads, and possibly some street flooding.

The heavy rain may also be accompanied by strong winds near the coast. Some 40+ mph wind gusts are possible late Tuesday night into early Wednesday morning. The wind may be strong enough to cause some tree limbs and power lines to be downed.

Any heavy rain should be over by midday Wednesday, although clearing will not happen until Thursday morning.