Most R.I. school districts given green light to reopen for full in-person learning

PROVIDENCE, R.I. (WLNE) – Governor Raimondo announced in Monday’s press briefing that all school districts in Rhode Island, with the exception of Central Falls and Providence have the green light to begin full in-person learning on September 14.

August 31 was supposed to be the first day of school in Rhode Island, but was pushed back until September 14.

The 5 key metrics which all received a check mark are listed here: 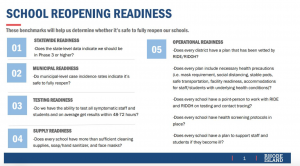 During the press conference, Governor Raimondo reiterated several times that the decision ultimately comes down to parents saying they do not have to send their kids back if they do not feel comfortable doing so.
The governor also said, just because districts are cleared for in-person learning does not mean they have to start in-person learning right away.
Raimondo said that districts can begin with a limited number of students and faculty in September, but by October 13 she expects all districts to be fully in-person.
Some districts, Pawtucket, Warwick, and Cumberland to name a few, have already stated they will not return in person on September 14.
The Governor clarified today that she herself will not take action against these schools, but hopes to see them comply with the state’s decision.
Raimondo said, “I’m hopeful that some of these school committees who made these decisions will now do the right thing and reverse those decisions, now that we have this new information. its not clear if they might lose their federal funding, now that we’ve said its safe to go back to school.”
The state will take a walk-thru of every school to make sure they are clean enough to begin the school year.
Schools will have new procedures and protocols for just about everything from, pick-up and drop-off, to lunch time.
If there is a concern about a coronavirus outbreak at a school, a team from the state’s newly formed operations center can respond to disinfect a school at just a moments notice. Rapid test will be available solely for students and teachers.
Categories: News
Tags: education, reopening, Rhode Island, RI, schools