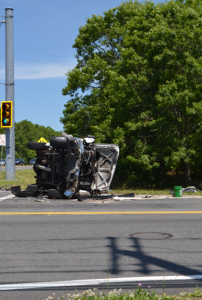 Once officers responded to the scene, they observed a red Toyota Rav 4 in the southbound lanes of traffic facing west. The Toyota’s front windshield was also shattered.

A white Chevrolet Silverado was lying on its passenger side off of the road, while a dump truck was parked on Hixbridge Road.

A preliminary accident investigation was conducted by Westport Police Officers Douglas Wenson. Officer Wenson said that the Toyota Rav 4 was at the time of the crash traveling south on Route 88 near the intersection of Hixbridge Road.

The drivers of all vehicles and occupants suffered what seemed to be minor injuries and were taken to Charlton Memorial and St. Luke’s Hospitals.

An off duty St. Luke’s Hospital nurse stopped to attend to the injured vehicle occupants. The nurse left the scene of the accident before officers could identify her. The Westport Police Department thanks her for her assistance.

The driver of the Rav 4 has been cited for several motor vehicle violations.