The husband of reality TV star Khloe Kardashian was stopped shortly before 4 a.m. and was arrested after a field sobriety test.

The CHP said Odom's car was observed traveling in a ''serpentine manner'' before he pulled off the freeway.

''Mr.
Odom showed objective signs of intoxication and was unable to perform
field sobriety tests,'' the CHP said in a report. Authorities said he
later declined to take a chemical test.

Odom, 33, was booked for investigation of driving under the influence of alcohol or drugs and jailed on $15,000 bail.

He was released Friday morning after posting bail.

A message for his agent, Jeff Schwartz, wasn't immediately returned.

The 6-foot-10-inch forward has played for the Los Angeles Lakers and Clippers, the Miami Heat and Dallas Mavericks.

Odom
broke into the NBA with the Clippers in 1999, playing for them for four
seasons before spending the 2003-04 season with the Heat. 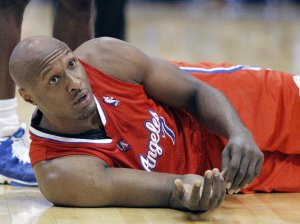 After
spending the 2012 season with the Dallas Mavericks, he returned to the
Clippers last year. He became a free agent at the end of the season.

Bryant Builds On Identity, Prepares For In-State Showdown With Brown